Rosie’s Quilt – From the Beginning 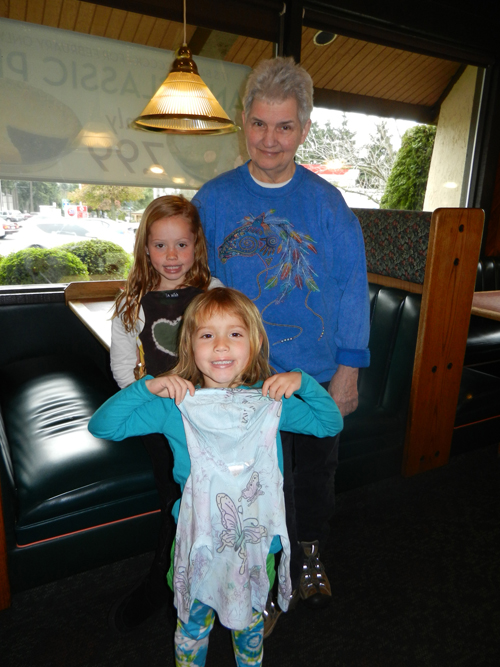 Rosie’s quilt (see Rosie’s Quilt – One of Two Quilts Made from Baby Clothes) began with a phone call from Traci, the girl’s mother, asking me to make two quilts for her daughters Rosie and Nina out of their baby clothes. They were 7 and 5 years of age at that time. Of course I said yes, with excitement at the prospect, and the upshot was that I met the entire family, including their dad, at a restaurant in Washington State at which the picture above was taken.  What a great experience to meet the family, get to know more about the girls, and have Traci show me some of the outfits and explain what she wanted in the quilt.  Except for a few specific requests, she left the design up to me. 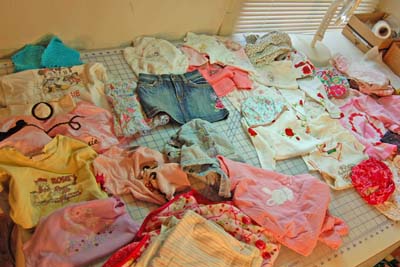 When I was finally ready to start working on the quilts, in July 2012, I began by sorting out Rosie’s clothes (which Traci had separated out into bags) to see what I had to work with. Being the oldest of the two, it made sense to start with Rosie’s. There were many “other clothes” which the two shared and which acted as fillers when they were needed. 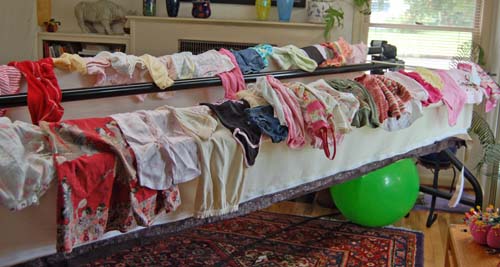 Next I downloaded various pictures and clip art from the web to use as templates.  And made my first block for Rosie’s quilt:  Baby Rosie wearing the outfit the hospital provided for newborns. The baby blanket in the picture was part of a small crocheted dress made by Rosie’s grandmother Rosie for her daughter Traci.

Traci’s mother Rosie crocheted several little dresses for Traci, and Traci wanted me to use part of at least one dress in each quilt. In the bottom right hand corner, you can see a portion of another little dress used in another block.