Cathy called me in January, wanting to give her husband Bobby an exciting and unusual birthday gift. She wanted me to make a tie quilt using about 200 ties from his large collection of over 500. And she needed it done in about two months’ time. I was working on another tie quilt when she called so I only had a narrow window to fit it in within the alloted time. If she could get her ties across the country to me soon, I decided I could do it. She did.

Whenever I can, I like to provide customers with mockups of the various patterns my software program can produce. Below are a few of the mockups I showed Cathy, once she indicated that she liked the ‘vine’ idea: 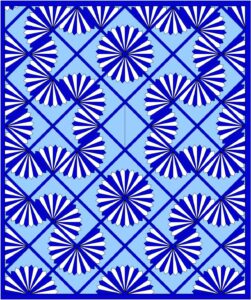 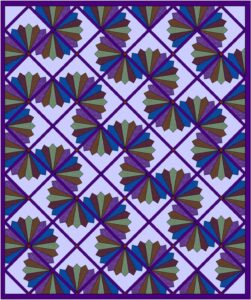 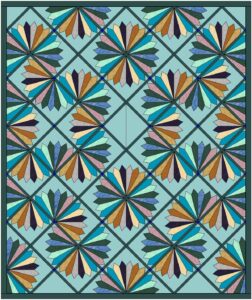 Cathy and I agreed on Mockup C for her pattern. Mockup A with its 7 blades per block were long and narrow and didn’t show enough of tie itself. The blades in Mockup B were fuller but too small, however, the longer blades in Mockup C were just right.  I went to work, thinking it would take about three weeks to make, but I was wrong.