T-Shirts Made into Quilts

I used to wonder why anyone would want a T-Shirt Quilt. Of course, I’d never seen one, didn’t own any t-shirts I’d care to immortalize, and wondered how you’d ever sew something so stretchy. Apparently there are still people out there with that old-fashioned view.

After making my first t-shirt quilt a few years back, I was hooked. 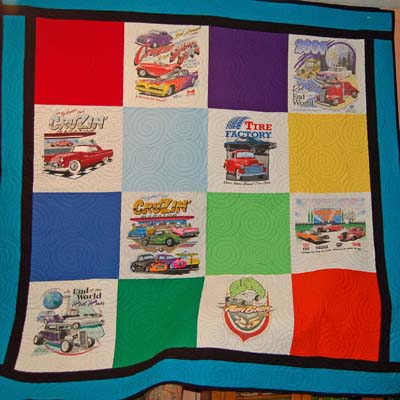 My friend Sarah said her father-in-law collected t-shirts that he acquired at car jamborees. Apparently he had dozens of them and she thought making some of them into a quilt would be a great present. 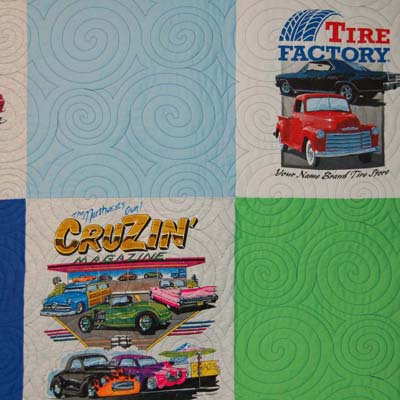 So she asked her mother-in-law to give her some of the t-shirts for a quilt, only to discover that her mother-in-law had finally decided there were too many so she’d gotten rid of a pile of them. Still, Sarah managed to scramble up eight shirts.

And I also discovered that almost any kind of iron-on (fusible) backing worked to tame the stretchy t-shirt cotton. I’ve tried a lot of fusibles since then and although I have my favorites, almost any kind will work.

So the quilt was made. I filled in for the missing t-shirts with blocks of complementary colors, which I really think made it even more interesting by showcasing each t-shirt. 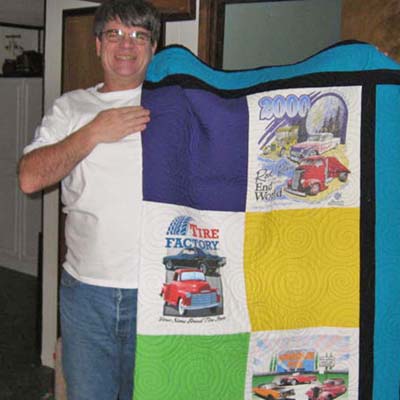 Sarah said her father-in-law loved his quilt! Above, you can see him proudly displaying his quilt.

If that pile builds up again, I’d like to make him another quilt with lots and lots of his t-shirts.

Since then I’ve made half a dozen more t-shirts, but this first one still remains my favorite.