Yesterday’s blog pictured the Contemporary Log Cabin Quilt made for Luke out of his dad’s clothes. Above is the second quilt I made for Luke that fits the twin bed he has now, at age nine. This one is also made from his dad’s shirts, with one of the inner borders made from a pair of loosely tied trousers and an outer border made from his jeans.

Most of the 52 shirts that I had to work with were long sleeve button-down dressy shirts, but three of the shirts were delightfully wild and sporty, Hawaiian shirts or something akin. I used these to form the inner design of the Lone Star. 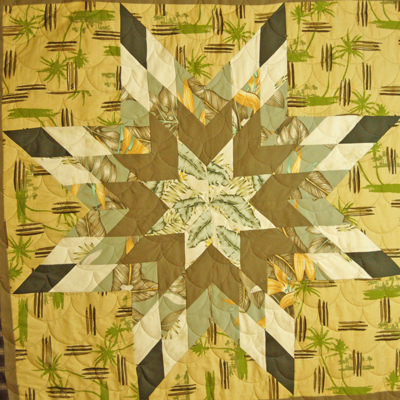 Most of the shirts I had at my disposal were light colored, but the lone star needed some contrast, so the points were made out of left over material from one of the trousers used to border another quilt for Luke’s sister. The inner brown pieces were part of a shirt – inserted for contrast. All the rest, including the background came from the three “Hawaiian” shirts. 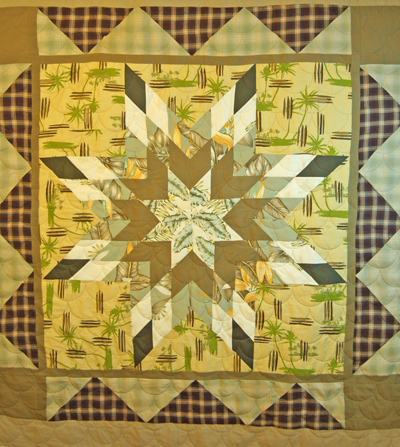 After adding a one-inch border from the same brown shirt in the middle of the Lone Star, I added a 5-1/2-inch border of pyramids out of two shirts. I actually made a mistake on one side, turning the pyramids in opposite directions, then decided I liked the contrast and finished it off that way. I have talked to other quilters and it seems as if “incorporating mistakes into the quilt” is a recurrent and common theme! 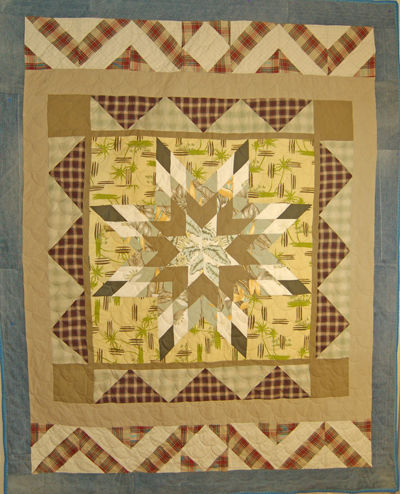 The quilt needed to be lengthened to fit a twin-sized bed, so I added another simple pyramid border out of similar shirts and finished off by using material from two sets of jeans for the outer border. Incidentally, when using trousers, I often leave the crease in where it appears as a reminder that this material came from the trousers. You can clearly see the crease in the jeans on the right hand side. You can also see the worn patches throughout. I think this adds to the charm. 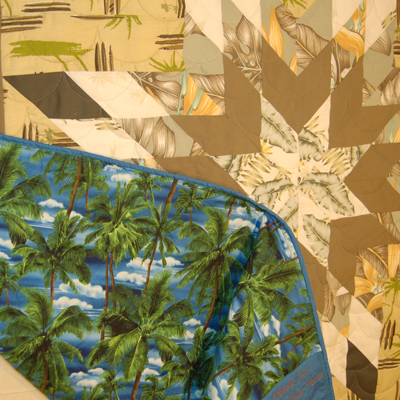 For this quilt I chose a backing which mirrored the material in the background of the Lone Star center medallion. It also mirrors the colors (green) used throughout the quilt, although admittedly in a much brighter version. I thought this made for a fun and completely different back. Because of the amount of material I had to work with and the dimensions available, I had the trees facing across the quilt rather than bottom to top. I didn’t think Luke would mind. 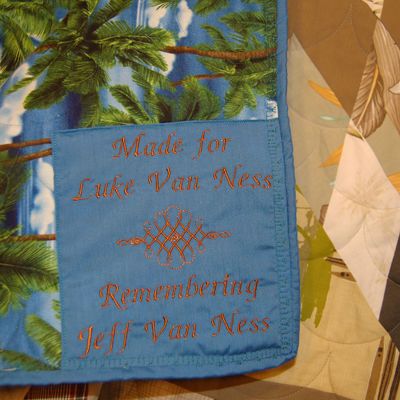 Above is the label. 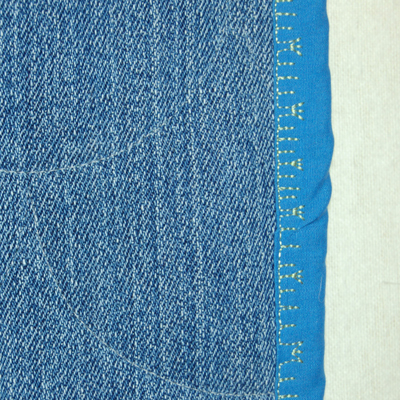 I used a clam shell quilting pattern and a light blue binding to match the jeans and the backing. Note the tiny trees embroidered in the binding, mirroring the trees in the background of the center medallion and also in the backing.

Luke should get his two quilts in two days.