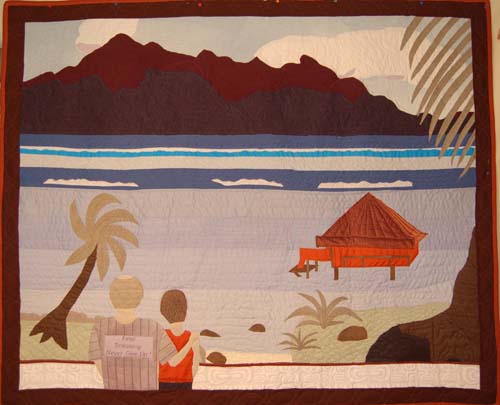 Soon after Marge lost her beloved husband of just three years (they had known each other for thirty years and had finally gotten together), she decided to send me his shirts and jackets for a quilt.  She wanted me to make a throw which she could wrap around her, made out of the sleeves of his clothes, so she could feel “his arms around her” again.

She wanted the quilt to picture a simple and serene scene from Bora Bora, where she and Bill had gone on their honeymoon. I made the quilt, having been supplied with plenty of pictures, such as the one below: 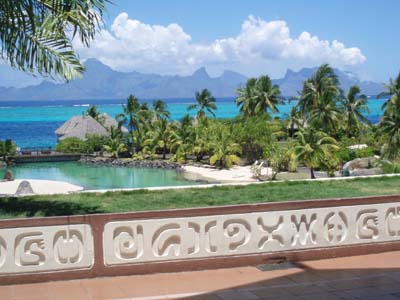 Marge sent me a wrap that she acquired on her honeymoon, from which I was able to replicate the wall in the picture above.  The tie and handkerchief that Bill wore at the wedding became the little hut out in the middle of the water: 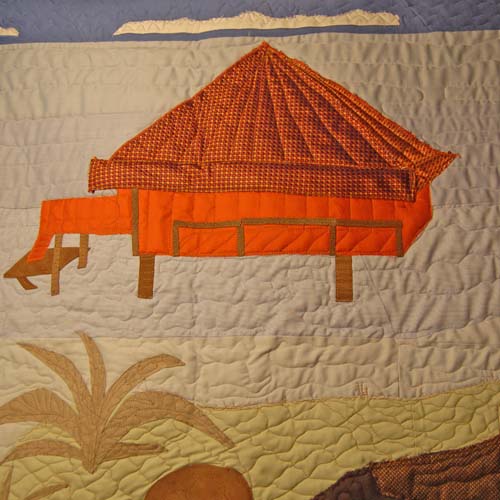 And the motto on the back of “Bill’s shirt” was actually Bill’s motto in real life: 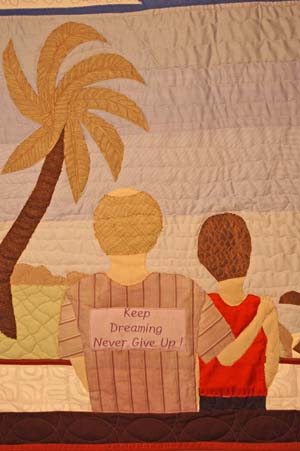 When Marge received the quit, she wrote:

“The quilt arrived today and it brought me to tears – it is absolutely beautiful and exactly what I had in mind !!  I could identify each and every piece of clothing that you used.  You truly have a vision and a talent.  The border and backing is also perfect – I could not have wanted or expected more.  I just LOVE it.   I know that I will enjoy it each and every time that I have it wrapped around myself (which, by the way, will be daily now that the weather has gotten colder).  I am at a stretch in time where I am missing my husband very much and this will bring me so much comfort.”