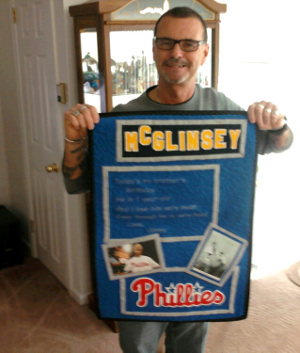 The little wall hanging above was also made for Louise (see previous post) as a late Christmas gift.  This one was for her brother-in-law and was also made from the t-shirts of her husband, shown in the two pictures – one wearing the “Phillies” shirt and one older photo of him playing baseball with his younger brother and father.

This wall hanging features a poem which Jim wrote when he was in the sixth grade celebrating his younger brother’s first birthday. It reads:

“Today’s my brother’s birthday and he is 1 year-old.

I love him very much, even though he is very bold.”

Louise told me that she thinks he was assigned to write a poem, so he came up with this one.  I loved that poem, and I think his brother did as well.