Patricia sent a large box of her husband Wilson North’s clothes to make bereavement quilts for many people in her family. I made a number of quilts for members of her extended family, finally making the t-shirt quilt above for her. I labeled her quilt “Memories Wilson North – my life’s  traveling companion,” according to her wishes. The t-shirt logos speak to the many places they visited during their years happily spent together.

Upon receiving the quilt, Patricia wrote, “How delighted I was that you were able to put sports, surfing travel & photography, abstract art and gardening into coherent whole . . . to make the colors match and to use his camouflage gray along with the salmon. I practically had to hogtie Wilson into his first salmon t-shirt but wearing it he receive so many compliments that it became a favorite color of his along with his camouflage grays and blues.”

Wilson was a man of many interests and talents, one of which was surfing. The very first quilts I made for Patricia were Christmas gifts for his two grown nephews, quilts which had a definite surfer theme. 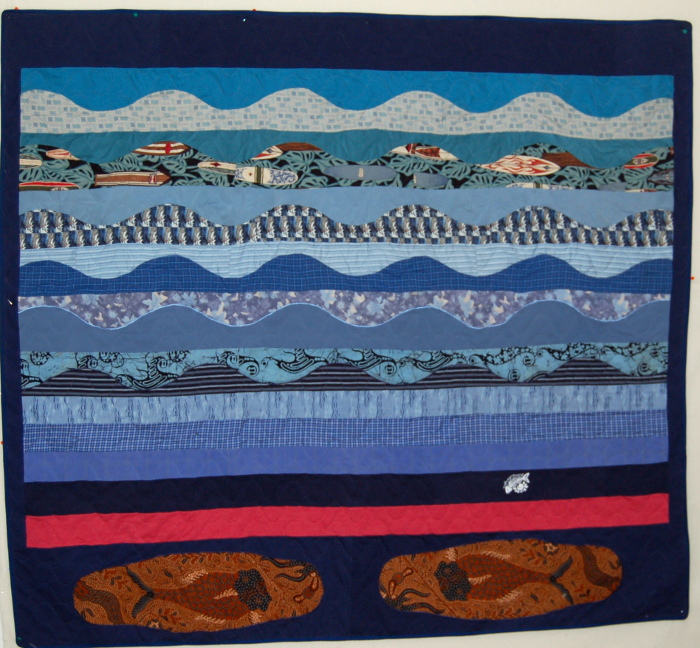 These two “surfer quilts” (above and below) are quite similar – each made using Wilson North’s clothes and each made for a nephew who himself likes to surf. According to Patricia, Wilson taught both nephews how to surf. 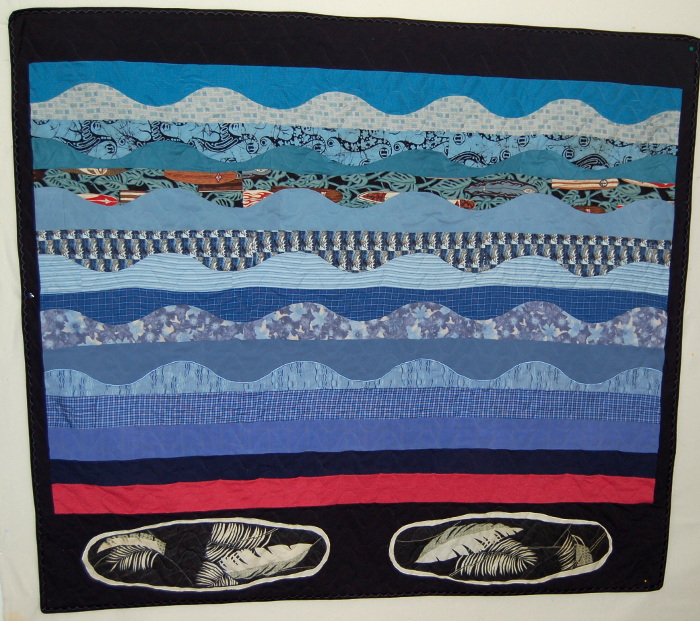 Patricia liked the idea of a compass quilt, especially since Wilson’s last name was North.  I used Wilson’s clothes to make the compass quilt below, while supplementing it with other fabrics as needed. This picture was taken on a dark day, so the border displaying swatches of his lovely shirts are difficult to see, despite my camera’s best intentions. 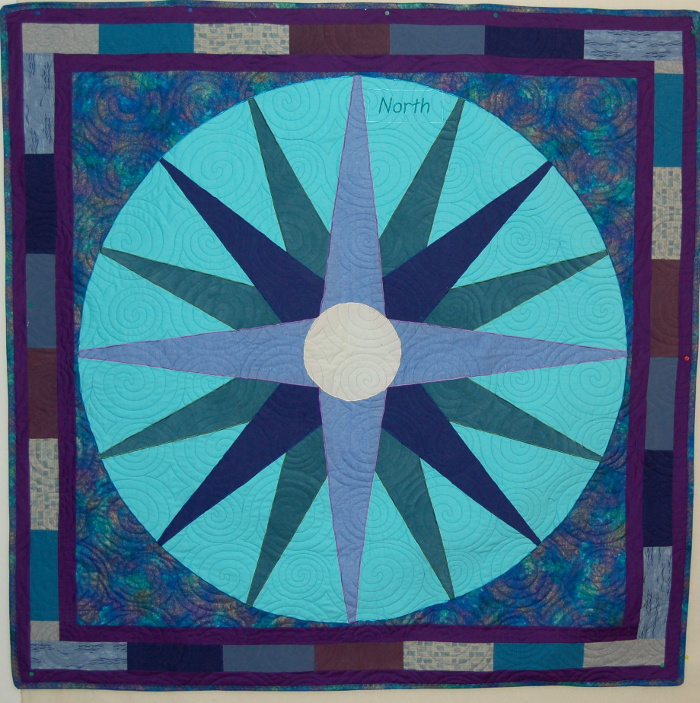 I also made her a compass pillow. 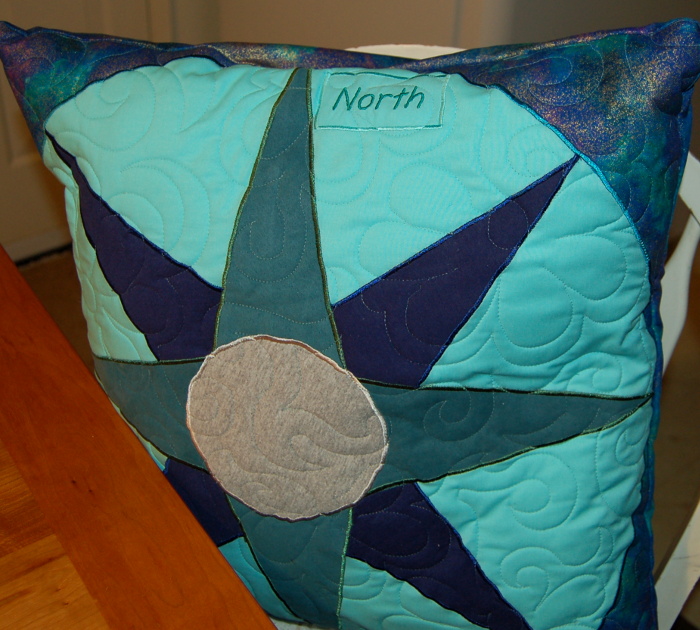 As I’ve made so many quilts using one big box of Wilson’s clothes, I’m reminded of the famous scripture involving the loaves and the fishes. No matter how many quilts I made, there miraculously seemed to be fabric for yet one more quilt. 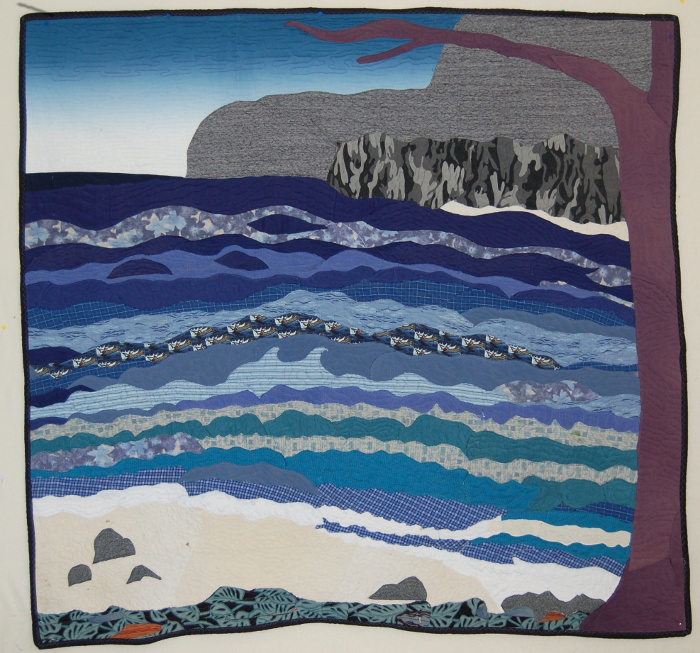 In making the quilt above for Patricia’s niece, I was working mainly with scraps left over from previous projects. This is why there are loads of waves or changes in color in the sea below as scraps were all I had to work with. Quite frankly, I loved the overall appearance of a changing, tumbling sea.

My favorite find was a shirt that had gradations of color from very light to dark blue, which I used for a darkening sky (see below for closeup). I used every bit that was left of that shirt. The gray hills in the far distance were placed there to cover up the fact that there was no more “sky material”. I think it worked. The bare tree at the side was a good cover for the ragged edges on the right side of the quilt. I also liked the way it framed the picture.

Another treat for me was finding the bit of camouflage material that mimicked sheer cliffs on the side of the gray wall in the distance. Below the wall you can make out a narrow strip of beach. 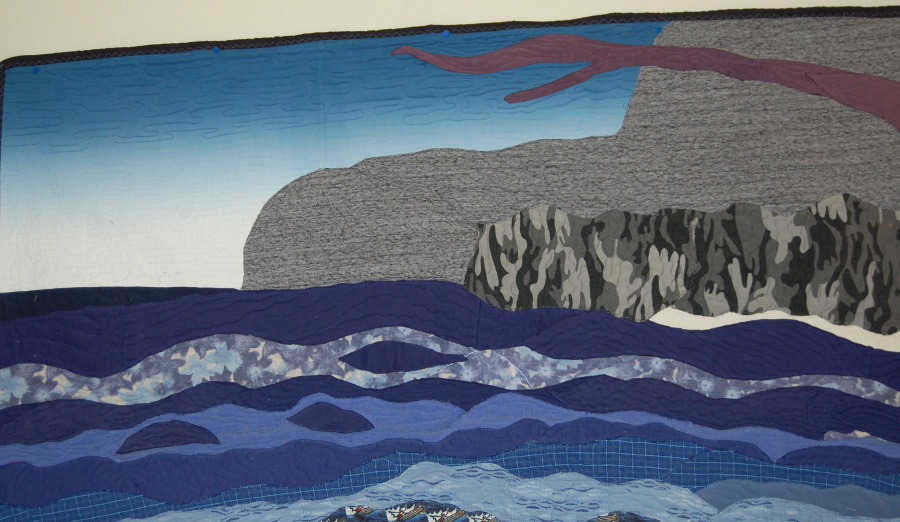 Closeup of the seascape quilt made with Wilson North’s clothes.

I think there are still a few more items that Patricia wants me to make!

Patricia wrote that “I found your work on the web  and your way with color and making [quilts with] such a variety of colors and materials with different weights is what attracted me. I knew I could trust you to make it work and you succeeded beyond my expectations.”