Beth met David online just as both of them were about to give up. David was a widower and Beth had never married. Being taller than average, Beth was accustomed to being single and in fact, when David answered her online resume she asked, “Did you notice how tall I am?” His answer was a clencher. He said, “Of course I did and if that had been a problem, I wouldn’t have contacted you.” They met and the rest, as they say, is history. Well not quite. 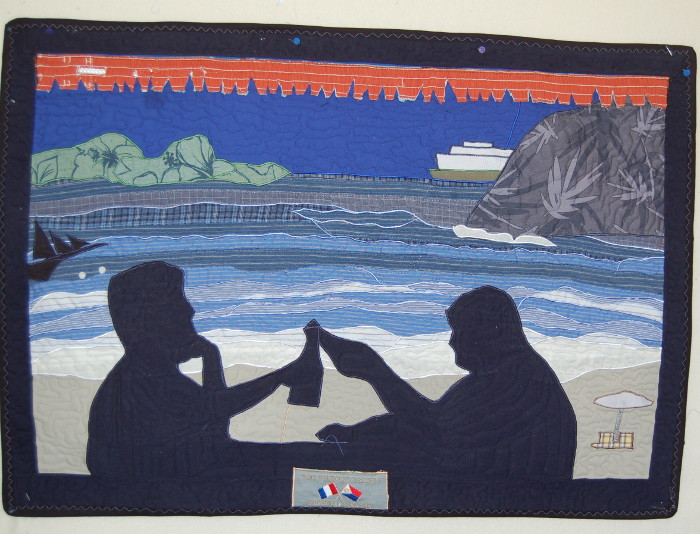 Everything was wonderful. Beth not only fell in love with David – and he with her – but also with his grown son and daughter and his grandson Austin. He had a barn and animals and Beth loved it all, included the two pet pigs. But months later David got sick and he was told he didn’t have long to live. So they sped up the planned wedding and went on a Bali Bali honeymoon (pictured above). Included in the wall hanging, Beth wanted a tiki-hut, a cruise ship, the sea and the sand, of course, and a lounge chair plus if possible something to show they went scuba diving. The wall hanging  was made entirely from David’s clothes, with the exception of the black t-shirt material. Tiki huts famously have thatched roofs, which I managed to portray using the elastic band of David’s swimming trunks. 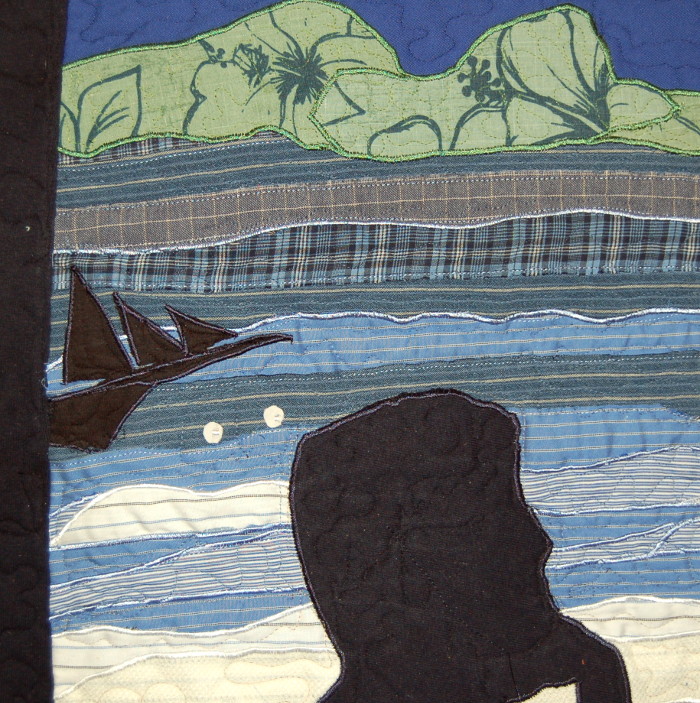 Beth said they went scuba diving off a touristy pirate ship (which I depicted on the left) – but all I could manage to show of the divers was their two heads clad in white helmets bobbing in the sea (actusally these are buttons.)

After receiving the quilts and the wall hanging, Beth wrote:

“Those 2 white helmets are my very favorites !!  And what strikes me every time when I look at the wall hanging is that the 2 people really look like David and me ❤️. And the waves !  So many blues blended together – you have so much talent !!  I am so happy that I lucked into finding you ! ?” 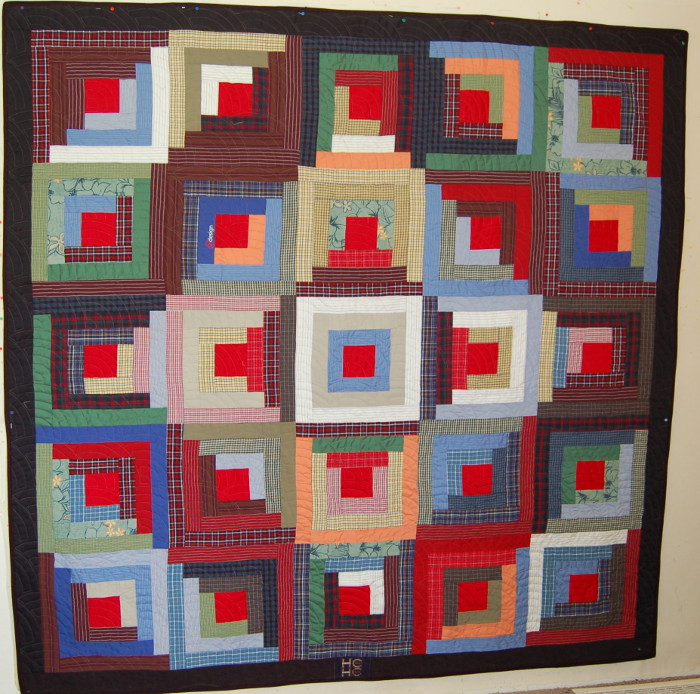 David’s shirts were both plentiful and colorful so it was great fun to make a large bereavement quilt for Beth using a popular log cabin pattern. Although Beth had experienced a lot of pain losing David, she is a remarkably resilient lady who counts her blessings, among them the family she gained – Chris and Erin, David’s son and daughter, and his grandson Austin. She wanted quilts also made for all three of them.

Bereavement quilt for daughter Erin made from her father’s shirts 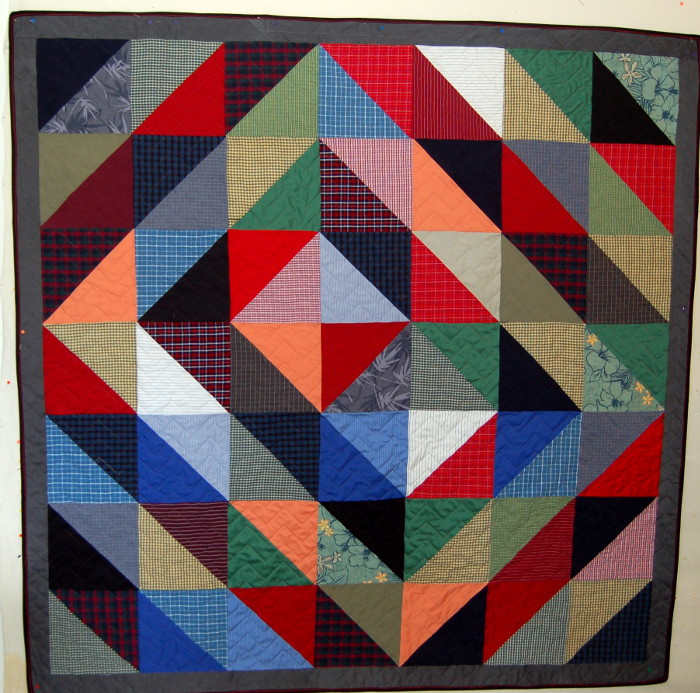 Bereavement quilt for son Chris made from his father’s shirts 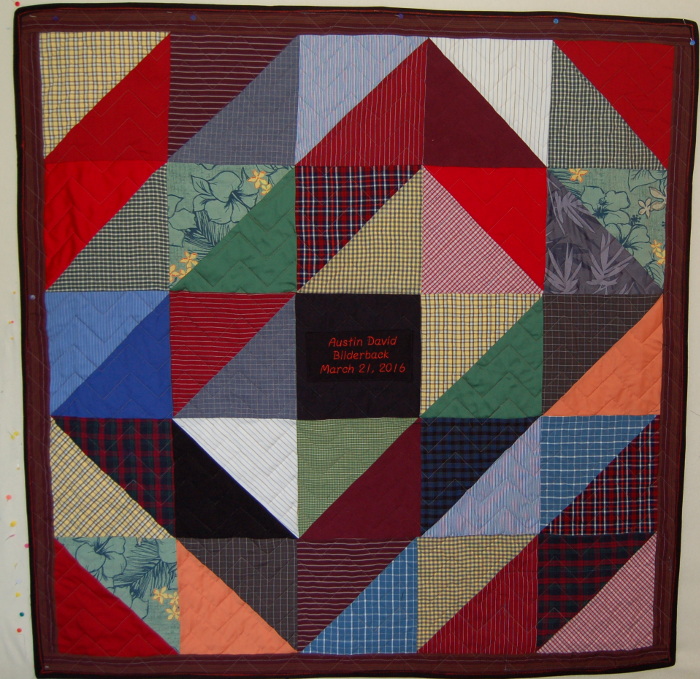 Bereavement quilt for grandson Austin made from his grandfather’s shirts

Austin’s quilt is a smaller version of his mom’s and his uncle’s quilts. The pattern is one of my favorites – I call it is a “fake log cabin” pattern, so versatile and simple yet beautiful. Each version of this quilt looks entirely different, all depending on the materials used and the design chosen. 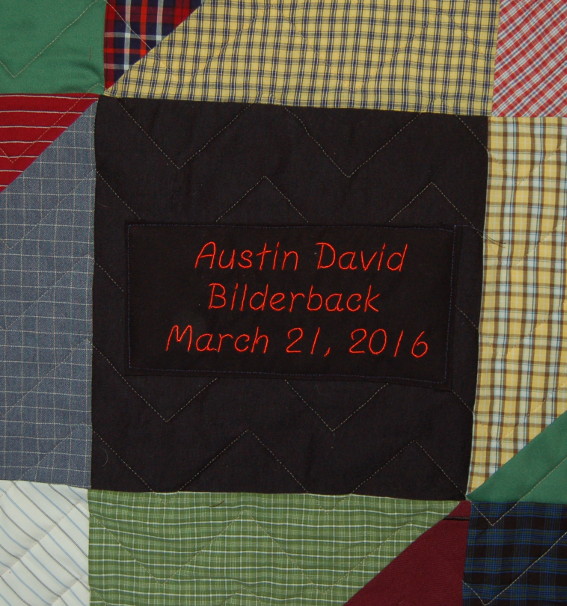 Label made for Austin’s bereavement quilt honoring his granpa

No matter if a quilt is a bereavement quilt or a baby quilt, I think it is important to put a child’s name and their date of birth on the quilt. The label above is Austin’s.