A Quasar Quilt for Eli – His Space Quilt

Why a Quasar Quilt?

Eli had an older sister who received a wonderful quilt made by her grandmother. But Eli never got one, because unfortunately his grandmother died before she could make him one. He was four at the time I made his mother a quilt that she loved. Now both his sister and his mother had a special quilt, and he thought he should have one too. His mother Emily agreed and asked him what type he wanted. He thought volcanoes would be great, and maybe dinosaurs. His choice of colors changed from time to time as well, and since this was an important decision, Emily waited to see what he settled on.

By the time he was six, his interests had honed in on quasars. He was fascinated with them, and in fact interested in the entire solar system. So quasars it was. His mother settled on the following picture as a template for my major quasar. 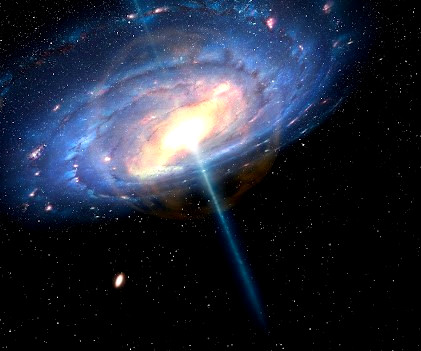 Picture of actual quasar used as template for quasar quilt

Three people were involved in planning this quilt – Emily, Eli and of course myself. Emily was interested in how I would use all the amazing clothes that had belonged to her mother and Eli wanted to be sure the quasars on the quilt would look somewhat authentic (or at least I thought he was smart enough to care). And I wanted to please them both, creating an unusual quilt that both a boy and his mother would love.

Emily sent me photos of quasars that Eli liked, and we ended up using the one above as a template. I reciprocated, sending several pictures of the various solar elements so Eli could choose the ones he liked. He was quite precise in his choices, which I appreciated. I made an effort to honor his wishes. Below is my first attempt, after making the most important elements – a large quasar plus a few further away, the sun, the earth, Saturn and Jupiter. 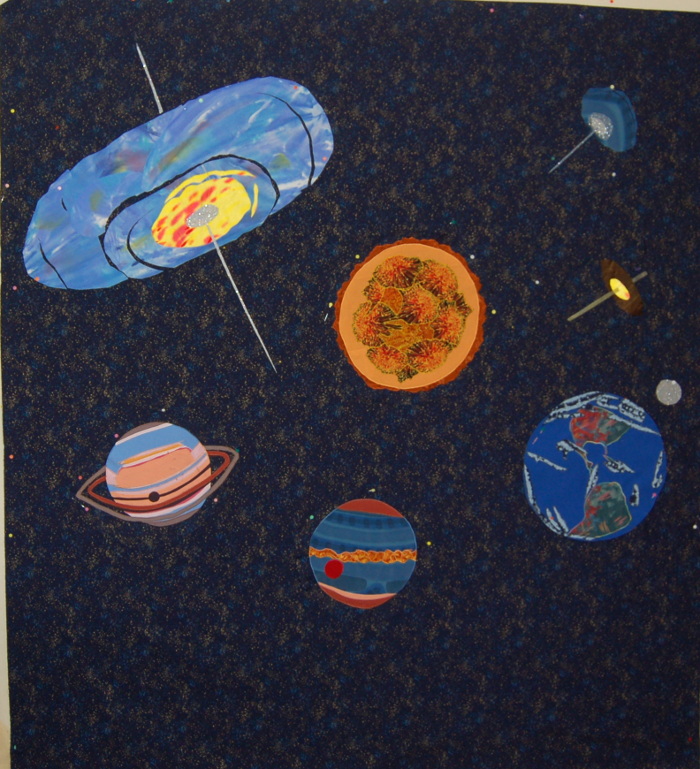 With Emily’s approval I found the perfect ‘night sky’ fabric as a background for our solar system (see picture above). I ordered it through Backside Fabrics, my favorite store to get backings. Eventually, with prodding from Emily to think outside the box while using her Mom’s clothes, I used various pieces to showcase each element. Below you will note a plush green background to Jupiter, as it appears on the quasar quilt. 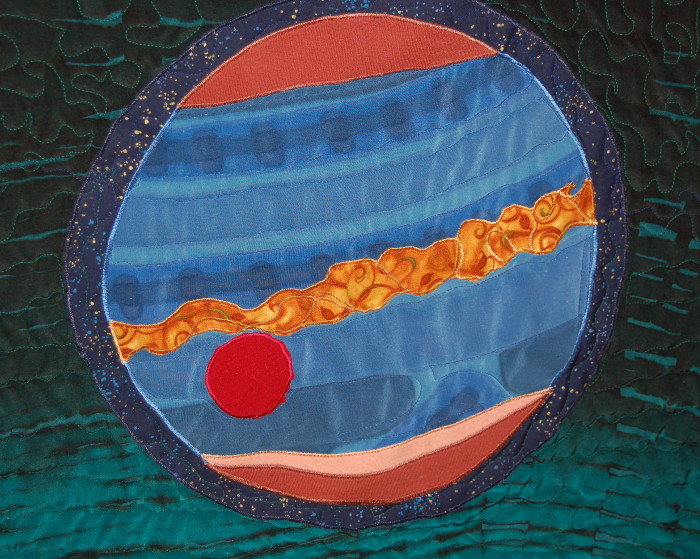 Or check out the warm brown fabric surrounding part of Saturn. 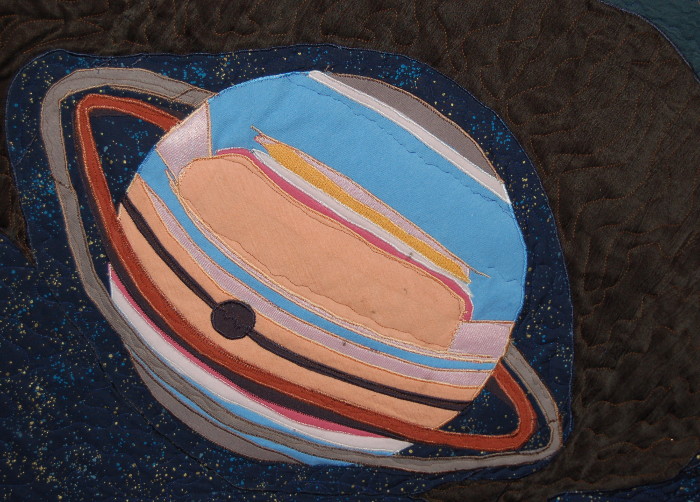 Saturn as it appears in the quasar quilt

As much as possible I chose these fabrics to fit in with the overall theme – usually dark pieces of gray, black, navy. brown or dark green. 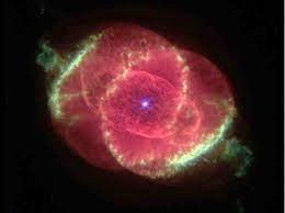 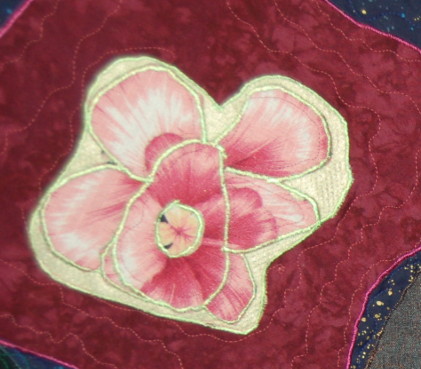 The most difficult problem in making this quilt was how to blend fantasy with authenticity. Emily allowed me free rein which helped immensely. She told me to just have fun and I did. For instance Emily’s mother had a beautiful multi-colored raincoat which made a perfect fabric to show the continents on the earth’s surface. 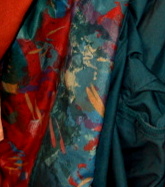 Note both use of multi-colored raincoat and gray wool backing to both earth and its moon. 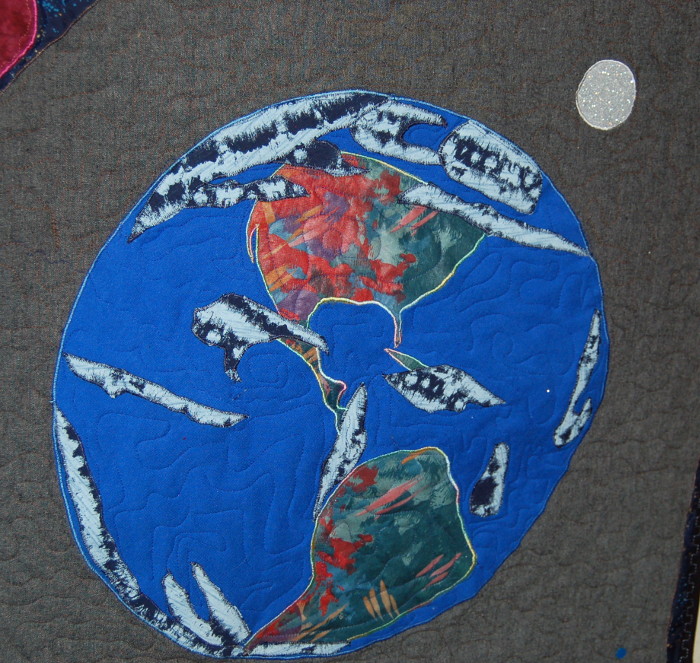 The earth as depicted on Eli’s quasar quilt

His grandmother also had an outfit that looked as if it were made out of clouds, which I used to advantage, dotting them around the earth’s globe. 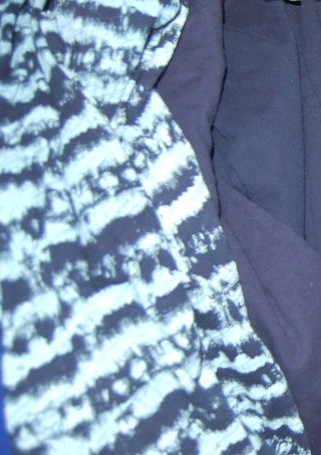 Fabric used to make clouds around the earth in quasar quilt

Fortunately I didn’t have to worry about dimensions of each element in relation to the others. I concentrated on making each element as true to its template as I could instead, while using clothing instead of store bought fabric. I went a little wild when depicting the sun, mostly because I wanted to emphasize its fiery outer shell by using some of the ‘hottest’ items among these beautiful clothes. The fabric in the center of the sun – what resembles bundles of chrysanthemums – was one of the few fabrics that came from my own stash. It seemed both appropriate and whimsical. 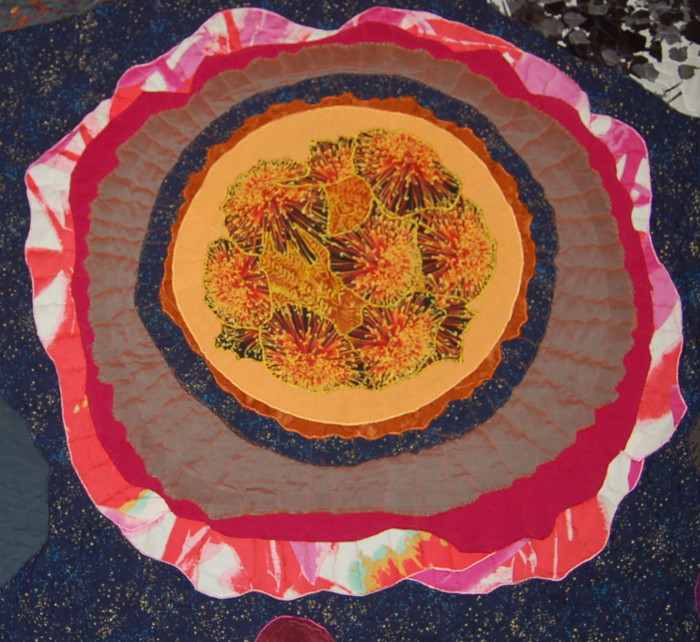 The backing was exciting (came from the same Backside Fabrics online store) and the label endearing. 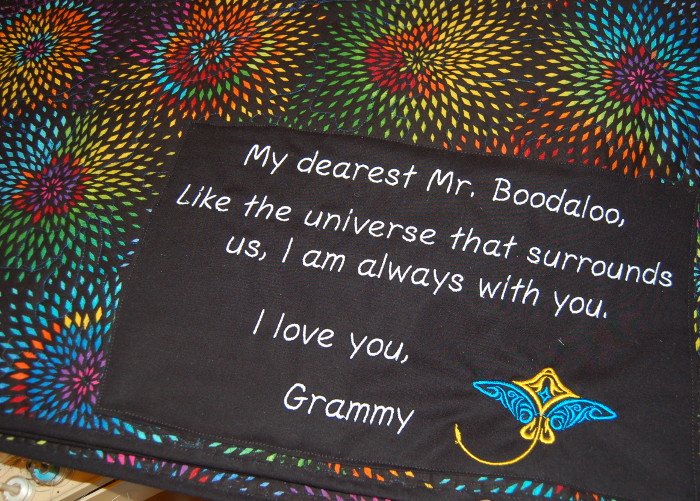 Backing and label on back of quasar quil

The response I got from Emily once she received the quilt was overwhelming joy and appreciation. It met not only with her whole-hearted approval but perhaps even more important, Eli loved it.

These types of responses are what we quilters thrive on. 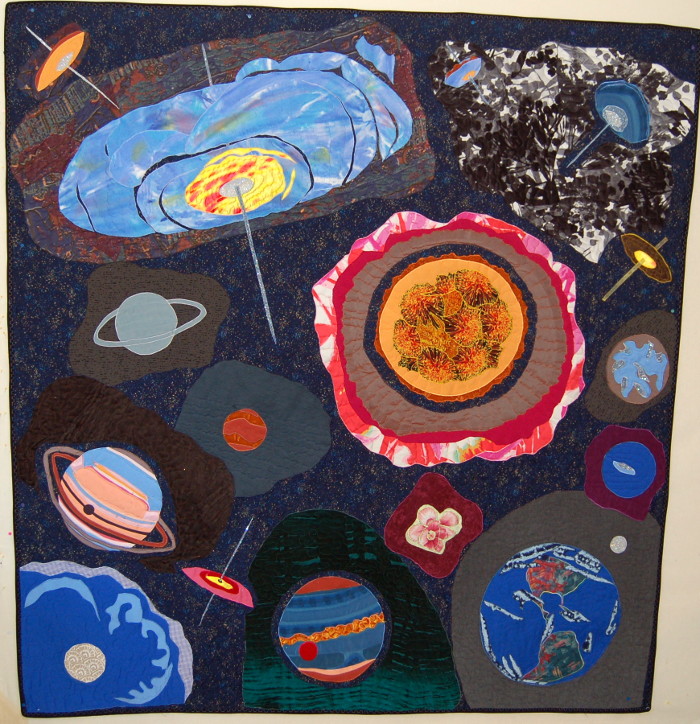 Quasar quilt for Eli made using his grandmother’s clothes