A 3D Bereavement Quilt to Memorialize a Mother

I had no idea I would make a 3D bereavement quilt for Ariana when she sent me her mother’s colorful clothes. She sent me a large box containing fabrics her mother had used in various sewing projects. But it was the five blouses that caught my attention as they were made of rayon or polyester with a silky feel to them. Immediately I knew that they would be the focus of the quilt.

Many of the other materials were not materials that would go well with the lovely blouses. I gave them away to a fellow quilter who makes small quilts for needy children. Those items that matched the blouses I kept to use in the quilt.

Using my quilting software, I made a mockup of a design for my 3D quilt (see above). I liked it and so did Ariana, but it seemed a bit thin, almost like a lattice. I widened the framing around the blocks which heightened the appearance of a deeper block, thus adding to the 3D effect. And I was satisfied.

After making the few templates I would need, and preparing the fabrics, I cut out all the necessary pieces. I used black for the framing corners and to add a 3D effect in each block. 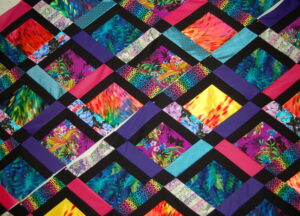 Once all the pieces were cut out, I sewed the blocks together and attached them to my design wall. The blouses form the central diamond of each block. The frames are made from the mostly cotton fabrics culled from Ariana’s mother stash. 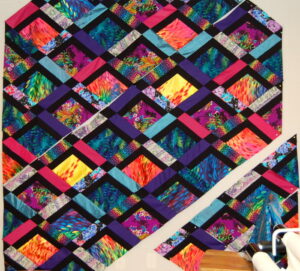 My design wall covers one side of my living room wall. It is essential when figuring out the best arrangement of blocks for a quilt.