Creativity is the Ability to Make Mistakes

Creativity is the ability to make mistakes. Art is deciding which ones to keep. Okay, I didn’t make that up. Scott Adams did. But is one of my very favorite quotes (as I’ve already admitted in the blog about Ronnie Noize). But I was thinking about that tonight, as I often do when quilting. I was at the end of a quilt when fabric began to bunch up – as it often does. Unless I started quilting in the middle and worked out – which doesn’t work on a long-arm. Or unless I had a perfectly constructed quilt – which is rarely the case when I’m “creating art” rather than working from a set pattern.

The blurry picture above depicts the problem I had – fabric (supposedly water) which has a big fold in it. This picture is a tiny part of a larger one, so the detail is bad. And this is a picture of the quilt before the patchwork was completed. I knew I had a problem even then, but thought I could take care of it while quilting. 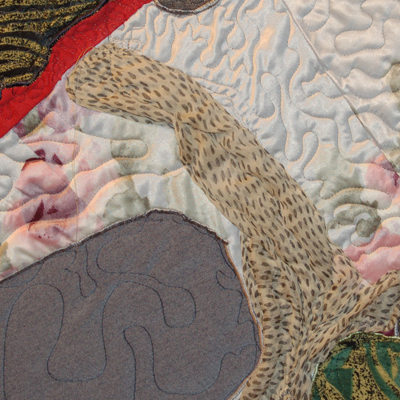 Well, here is where I had to use creativity. Despite my quilting efforts, the fold was not only too big to quilt away or steam away, it bunched all the way through to the border. So I knew I had to act. I actually cut the fold out! Yeah, that took courage. I’ve worked for the better  part of a month on this quilt (this is just a bit of it) and I didn’t fancy ruining it with a scissors. I then restitched the water part on the longarm so that the stitches showed, of course. I did take the quilt off its frame (thank goodness for zippers) to redo the border which also had to be downsized.

This fabric represented water flowing around a big stone so I bunched up some fabric that looked like foam (I’d already toyed with the idea of adding foam) and covered all the stitching. In a real stream, I’m not sure if this where foam would form, but hey, this is art – not life!  I hope. That’s where the “Art is knowing what to keep” comes in. I’m keeping it.