Grown Son’s Old Quilt to be Refurbished for Christmas gift

Marigrace sent me an old t-shirt quilt that she had made 20 years ago for her son Tim. He had loved that quilt (and it looked loved) but in many places it was in tatters. She hoped I could refurbish it so that she could give it to her son for Christmas. He was living in Vermont and could use a warm quilt, especially this one with all its treasured memories.

I discovered that Marigrace herself had made this quilt, her first and only quilt, with the help of seasoned quilters. Her husband had just died so she made it with some of his clothes and gave it to her son. She said it was therapeutic. She had done a beautiful job – so good a job that amazingly almost all the t-shirt blocks were still in good condition, even though worn and in some cases piled. I only had to replace about five of the 30 original blocks. The tattered part was basically the framework, the backing and of course the batting, which was almost non-existent by that point plus the five blocks.

I was fortunate that the quilt had been tied rather than quilted.  My first job was to take out the ties, many of which had already pulled loose. Next I pulled away the worn out backing and scraped off bits of batting stuck to the top. All the framework had to be replaced. Rather than try to take out all the stitches for the 30 blocks, I carefully cut out each block. The blocks were now only slightly smaller.

Fortunately Marigrace sent me some of her husband’s clothing for use in the new blocks, most of them wonderful old striped t-shirts. And although they didn’t have logos on them, it worked. 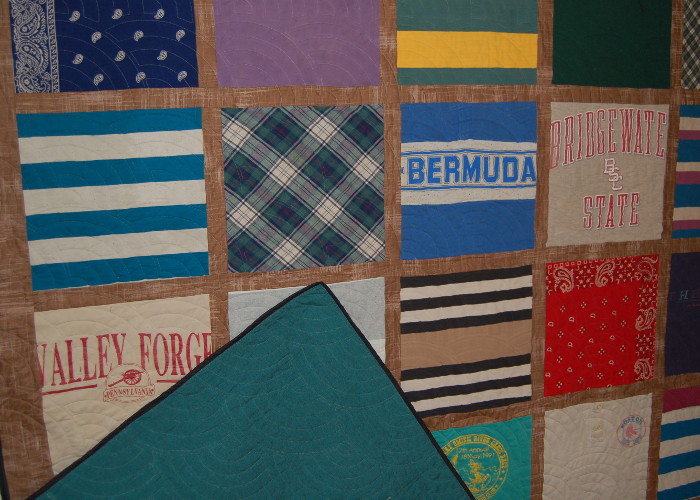 Probably the hardest part of refurbishing this quilt was to find a fabric that wouldn’t show up the aged fabric of the blocks by being ‘too new and flashy’ but still appropriate. I finally settled on a fabric that resembled a brown mat, after discarding one fabric after another. It wasn’t beautiful but it seemed to fit the blocks. It even had the look of grunch and would be appropriate in a man’s quilt, I decided.

I found a subtle turquoise backing that seemed to complement the older fabrics and quilted the patchwork on my long-arm machine.

Tim’s Response to his ‘New’ Quilt

Marigrace said that he loves his new quilt.