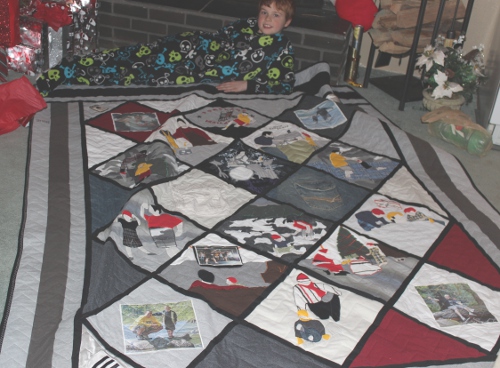 Brian shown with his quilt which he just received as his Christmas present from mom. The quilt, made from his father’s clothes, shows various scenes with him and his dad, who died two years ago of leukemia. Brian and his brother Lucas were expecting a quilt some time, but didn’t know they were getting them this Christmas. So they both had a say in what pictures were used but their one request was that in every picture only the one boy would show with his father. In all but one picture, I honored their request – the one where two little boys were covering their dad up to his chin in sand at the beach. 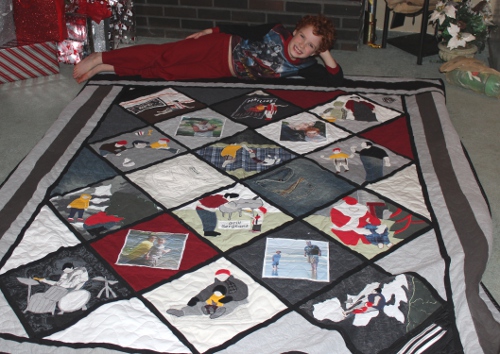 The second quilt is displayed by Lucas, who is two years younger than his brother Brian. The pictures on each quilt are of the same situations, but slightly different in detail. Their father loved to play the drums, was an avid Portland Blazer fan, enjoyed cooking with his sons, hiking, fishing, and sledding – but mostly he just loved his wife and his young family. They loved him very much and miss him. These quilts are meant to remember him and honor his memory.

In the middle of each quilt there are two blocks with pants pockets displayed. One of the pockets is sewn shut, but the other is open for the boys to keep things in – if they want to.