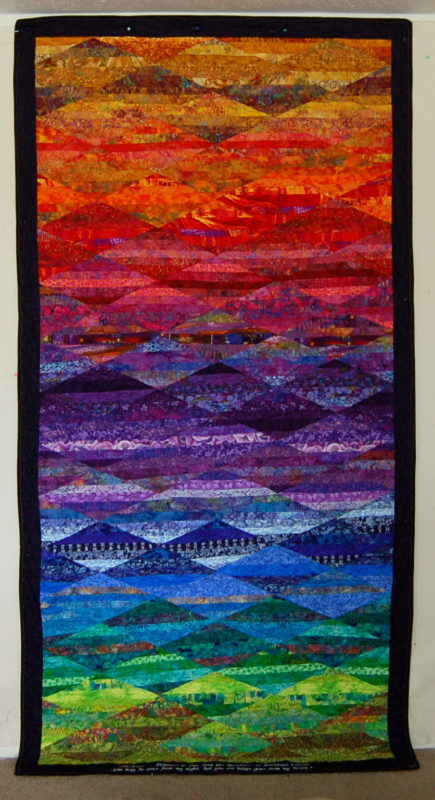 Quilt made for the Sanatoga Center in Pottstown, Pennsylvania to honor those who have passed away.

The nursing home quilt above was commissioned by the residents of the Sanatoga Center in Pottstown, Pennsylvania to honor those who passed away. The quilt was to serve as a covering for the body bag as it was carried away (for when a resident dies, they are honored as they are taken from the home) and displayed once more at a monthly service.  The residents wanted a quilt that would enhance those moment, something with a spiritual theme.  This was my challenge.

Theme of the Quilt

Only the size of the quilt was specific – the rest was up to me.  I knew I wanted a spiritual theme, one of hope and comfort, for it represented the end of life for all of the residents of the home. When I think spiritual, I think rainbows, so my plan was to make a rainbow quilt with pathways overlaid, signifying the road of life.

Construction of the Quilt

Over many years I have collected fabric and stacked them according to color, so the first thing I did was select all my favorite pieces of material from all the color stacks.

Never have I enjoyed making a quilt more than this one. I’ve heard of authors who said their book practically wrote itself. I felt that way about this quilt.  And best of all, a few weeks after I sent off the quilt, I received this e-mail from the wonderful lady who coordinated this project, saying:

“Hey Rosie- Just an update that we’ve used the blanket a few times now and the reception has been wonderful. The funeral director loves the idea and said he’s seen this done with the flag for veterans but nothing so nice in all his years for the general population. One of our nursing supervisors had a wonderful suggestion to use the quilt immediately after care was provided to the deceased and prior to the family returning to the room to say their goodbyes. I think the biggest impact has been on the families. All have expressed such a feeling of honor to see their loved ones cover with such a beautiful and bright quilt. We then are covering the body bag and residents have sat in the hallway and touched the quilt as it passes. I don’t know why but I really feel like this may end up having a larger influence than I anticipated. The staff really feel proud about it and it somehow brings more dignity and honor.”

Isn’t that the best response one could ever get?