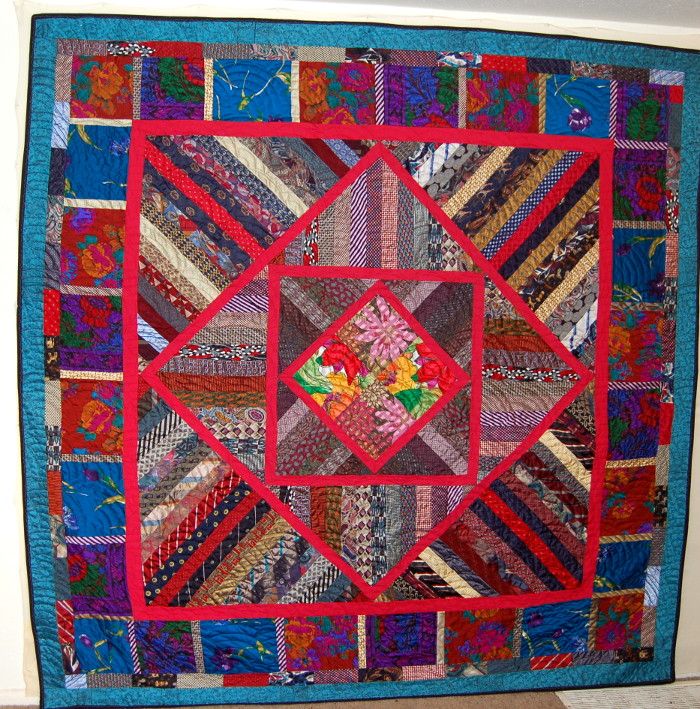 I had lots of scraps left over from the tie collection, plus almost 55 scarves. Teresa asked me to save the scraps and keep the unused scarves for a bereavement wall hanging for their new log cabin home which they were building in Appalachia. It took a few years for that lovely three story home to be built. I spent about six weeks making the bereavement wall hanging shown at the top. They received it right before they moved into their new home.

Teresa left it up to me to design the wall hanging. Her log cabin was situated in the mountains of Appalachia surrounded by trees, so trees were my focal point. I searched the internet for pictures of trees that I might like and almost immediately found one. 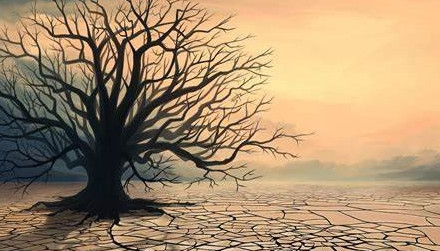 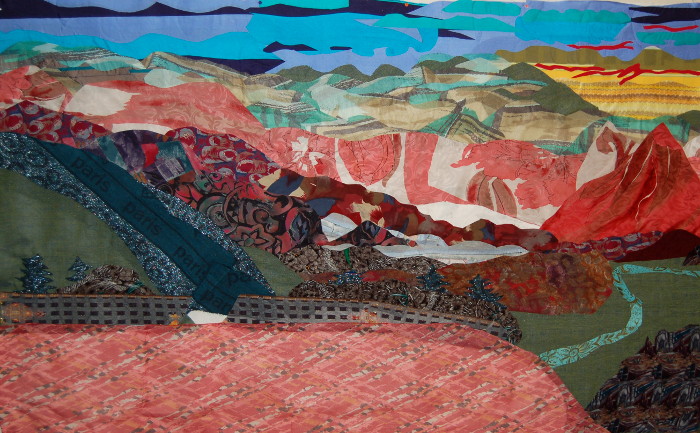 My first task was to cut out a large muslin backing over 6×4 sq.ft. and fasten it to my design wall. The idea was to attach pieces as I went along, and to that end I stabilized fabrics as I went along. If I planned to use part a particular scarf, I would stabilize it (usually twice as the scarves were thin and fragile) then add an adhesive. Now they were ready to be pinned onto the backing. Most of the tie scraps were already stabilized. All I had to add was the glue.

When I started the design, I followed the tree template above, finding appropriate green fabric for the hills on the left side which would form a background to the tree. Gradually I added other items, discovering gems among the scarves and ties. Almost before I knew it and with little concious planning, colorful hills and surrounding pink mountains ranged across the width of the wall hanging. I was especially thrilled with the bumpy range just below the pink mountains that was made entirely out of scraps of ties. What a marvelous grouping of colors, with even a little bit of mist curling among the hills.

At this point, there was no tree, no plain, no sky, no lower field in the right hand side. But I was so excited I begged my art teacher friend to come and see it. She offered me several suggestions, all of which I took, but the best one was her off-hand remark, “You know, you could extend the mountains up and beyond.”

I found one scarf with green, brown, tan and white that worked perfectly to depict a mountain range in its subtlety way beyond the original pink and white mountains. In the same fashion I was able to fashion a sky out of one very stylized scarf of blue, turquoise, navy, light green and white. For good measure I added a sunset (or sunrise?) out of two warm golden scarves.

At this point, I did stop and give my design some thought. I realized very quickly that I had a perspective problem. If the tree was on a low plain, no way could one see the mountains beyond the first range. I had to raise the tree platform. I had already found a large scarf that gave the artistic impression of a flat plain on which to plant my tree. I liked the fact that the rose color mimicked the pink mountains. But I scratched my head to think of some way to make it seem higher than it obviously was.

Again, the scarves came through. I found a long scarf that looked very much like an old wooden fence (at least in my imagination). By having the fence surround the plain and making it look as if the tops of some evergreens were behind it, I created the illusion of height. I even found a tie that made it look as if the fence was disappearing down the slope. I made a grassy field far below the slope and curved a distant river through it (another of Jan’s suggestions.)

After adding a few many items I was ready to apply the tree. I had made two large copies of the original tree picture and carefully cut one out, omitting most of the tiny background of branches. Fortunately I was able to find a polyester blend that looked exactly like the black bark of a tree at a local fabic and notions store (Joann’s). After applying adhesive to a large piece of this fabric, I spent a great deal of time cutting it out, then carefully applied it to the patchwork and ironed it on.